What is a frozen shoulder?

Frozen shoulder is a very painful condition that leads to pain and stiffness in the shoulder joint. It’s also known as adhesive capsulitis or shoulder contracture.

Symptoms typically start with pain, which is usually worse at night or when lying on that side. There follows a gradual stiffening and restriction of all shoulder movement. Pain may become worse as this occurs. In severe cases, there may result in almost no shoulder movement at all.

Although the condition can last for 18 months or more and usually resolves after this time, this can sometimes take several years if left.

The shoulder is a ball and socket joint. The end of your upper arm bone (humerus) sits in contact with the socket of your shoulder blade (scapula).

When you arm hangs down the capsule forms a small pouch. On raising your arm above your head, the underneath of the shoulder capsule pouch is fully stretched.  This is what gets thickened and tightens. It does this because of bands of scar tissue forms inside the shoulder capsule, due to inflammation. These bands of scar tissue stop the capsule stretching and hence restrict movement.

It is not clear why this occurs. It may start for no reason at all or after an injury. One or both shoulders can be affected at any time.

It’s not fully understood why frozen shoulder occurs, and it’s not always possible to identify a cause. However, a number of factors can increase your risk of developing it.

Most people affected by frozen shoulder are aged between 40 and 60. The condition is more common in women than men.

Frozen shoulder can sometimes develop after a shoulder or arm injury, such as a fracture, or after having surgery to your shoulder area. This may partly be a result of keeping your arm and shoulder still for long periods of time during your recovery. Your shoulder capsule may tighten up from lack of use.

Because of this, it’s very important not to ignore a painful shoulder injury and to always seek effective treatment and advice.

Pain and persistent stiffness in the shoulder joint are the two main symptoms of a frozen shoulder.

This makes it painful and difficult to carry out the full range of normal shoulder movements. You may find it difficult to perform everyday tasks, such as:

Symptoms vary from mild, with little difference to daily activities, to severe, where it may not be possible to move your shoulder at all.

The symptoms of a frozen shoulder usually get worse gradually, over a number of months or years.

There are three separate stages to the condition (see below), but sometimes these stages may be difficult to distinguish. The symptoms may also vary greatly from person to person.

During stage one, often referred to as the “freezing” phase, your shoulder starts to ache and become very painful when reaching out for things.

The pain is often worse at night and when you lie on the affected side. This stage can last anywhere from two to nine months.

Stage two is often known as the “frozen” phase. Your shoulder may become increasingly stiff, but the pain doesn’t usually get worse and may even decrease.

Your shoulder muscles may start to waste away slightly because they’re not being used. This stage usually lasts 4-12 months.

Stage three is the “thawing” phase. During this period, you’ll gradually regain some movement in your shoulder. The pain begins to fade, although it may come back occasionally as the stiffness eases.

You may not regain full movement of your shoulder, but you’ll be able to carry out many more tasks. Stage three can last from six months to many years. 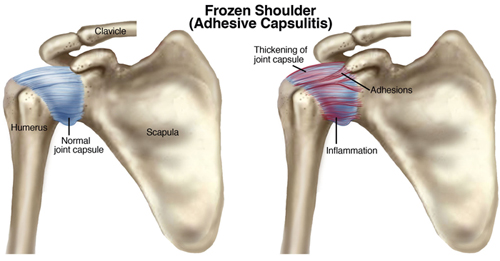 Treatment for a frozen shoulder will vary, depending on the stage of the condition and the severity of your pain and stiffness.

A frozen shoulder may get better over time without treatment, but recovery is often slow. It can take at least 18 to 24 months in some people, the condition may not improve for five years or more if left.

It is always best to treat a frozen shoulder as soon as possible.

Treatment usually involves acupuncture in the shoulder and manual therapy to the shoulder as well. This is greatly helped with the treatment of the upper back and neck, the ribs and the whole arm. Stretching exercises and hot and cold bathing to the shoulder may also help reduce the inflammation and improve the shoulder movement. Painkillers and Anti-inflammatory drugs can also help.

In some cases, injections of cortisone may help. As the last line of help, surgery or manipulation under anesthetic (MUA) may be indicated.